’"The ‘People of Canada Portrait Project’ was begun in 2014 in honor of Canada 150, which marked the 150th anniversary of Canada’s confederation. For the project, Saturley used social media and the internet as a tool for connecting to a diverse audience of subjects."

It has been four years now since I began painting portraits of Canadians, based on their photo submissions and stories. I have received hundreds of photos and am thankful to all who have taken the time to send in photos and stories. I never know what photo will grab my attention and you never know what the backstory will be, but the photo has to 'grab' me, I have to be invested in the subjects I will paint.

"The original images selected as reference points for portraits are still displayed in a stream on the project’s website (Peopleofcanada.ca). Through interviews, process photos, and short films the original subjects of the photographs become part of the project’s archive, material for future excavation into how people define themselves as Canadian."

When I have completed painting a portrait I find myself forever bonded to the subjects, through my expression on canvas and through their vulnerability in sharing their stories. It is the vulnerability that creates a great painting, and in this case it is required by all parties involved in the process of creating the portrait.

"By choosing their own photographs, Saturley’s subjects participate in their own self-representation. Yet they also cede control to the artist, who invents a landscape intended to amplify the relationship between the two subjects depicted."

I have received photos from Victoria, Vancouver, Montreal, Winnipeg, Yellowknife, Toronto and even Saskatchewan. Areas that I have yet to connect with in Canada include; Nova Scotia, Cape Breton and PEI. I am also seeking photos from Indigenous Canadians from across Canada and particularly Haida Gwaii.

As this project continues and I work on the portraits in between my core studio work, my goal is to exhibit up to 25 final portraits along with their original photos and stories. I have my eye on the National Gallery and the Museum of Human Rights in Winnipeg, until then I continue the discovery and examination of our national identity through the stories of the people and the landscapes that surround. Read full interview with Whitehot Magazine here. 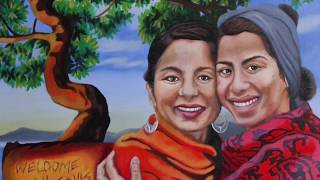 The People of Canada Portrait Project